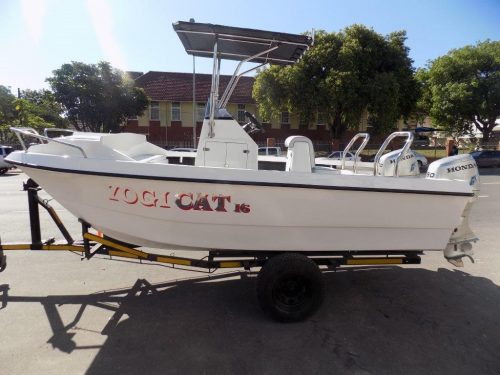 CONSIDERING the number of 16-17ft cats available on the market at present, they have to be by far the most popular sized craft in the country. Yet another was up for test — the Yogi-Cat by KZN Boats. This craft has been on the market for some time but has never received the exposure that it deserves. The team of KZN Boats consists of Ricky Jacobs, his partner Charles Devraj and Graham Napier, and they were all extremely excited to put the Yogi-Cat through its paces.

GENERAL IMPRESSIONS
Nowadays most styles and designs lean towards the bolder, curvier look to keep up with the modern trends in boating, but there are still some boats being manufactured according to standard designs and I feel that it’s good to still have these styles available.

We all have different tastes, and you’ll probably find that while the younger boating generation goes for the flashy looks, the older generation will prefer the more standard designs. The Yogi-Cat’s sharp lines and well-thought-out general layout looked very good waiting for the test to begin.

CONDITIONS
For a change the conditions for the test were not the normal sunny skies and flat seas, but completely the opposite. In fact, the conditions were torrid, to say the least! However, they were well-suited for someone wanting to get a true reflection on a boat’s handling capabilities — as I was.

The only hindrance was the low-light conditions, the buster of a south-wester and intermittent rain that affected our photography efforts Due to time constraints we only had one shot at this review, so there was to be no postponing. It was definitely going to be an interesting test on a 16ft boat!

TRAILERING
When there’s a south-wester pumping off Durban and you’re launching from Durban Ski-Boat Club, the launch conditions are generally flat, and so they were on our test day. The Yogi-Cat 500 comes standard on a sturdy galvanized breakneck trailer that was simple to operate when launching the craft off the beach. After the test, we reloaded her onto the trailer on the beach with the aid of an electric winch, and that was also a very easy task.

MOTORS AND CONTROLS
As tested, the Yogi-Cat 500 was fitted with twin 50hp Suzuki four-stroke trim-and-tilt motors, with standard controls and hydraulic steering. It was really good to see a smaller craft fitted with a hydraulic system as it really makes such a difference when it comes to operating a craft smoothly.

PERFORMANCE
Power out of the hole was reasonably quick with the Suzuki 50s, although I would say that you could go down from 14-pitch to 13s if you were surf launching on a regular basis. I have tested the 50s before on other 16ft craft, and the 13-pitch props definitely gave the necessary grunt to get going a lot quicker. Needless to say, with the 14pitch props the take-off and general power is very smooth and supplies low revving which is suitable for harbour/estuary launches and makes the boat more economical.

Once we were up onto the plane a few minor adjustments on the trims were all that was necessary to get her riding smoothly in the sheltered water off DSBC. At a speed of 20-25 knots, the revs hovered between 4 000 and 4 500 rpm.

Then it was time to venture offshore into what now was quite a mess — strong wind, swell, and a serious chop — the type of conditions that normally give a 16ft boat a hiding. I have to say that I was pleasantly surprised by the way the Yogi-Cat 500 handled the foul conditions. The first part of her performance that I noticed was actually before I even climbed on her, and that was how Ricky was keeping up with the photography boat in the rough conditions and how dry they were staying while I was ordering them around for the photoshoot. Shame, eventually they did end up drenched, but that was as a result of the spray from the photo boat — one out of Noah’s Ark.

Back to my perception of the craft’s performance. Once aboard the Yogi-Cat 500, I ran her directly into the rough chop in the more sheltered waters from Durban’s South Pier. At a constant speed of around 15-18 knots, the ride was soft, dry, and very stable. Running her side-on to the chop, and with the chop and swell, the boat handled in the same manner.

Sometimes you can get on a boat and automatically feel that she rides well, and so it was with this craft, so we decided to take the Yogi-Cat around the South Pier into waters not really suited for smaller craft. The westerly was probably pushing through at 20 knots-plus and the swell was getting larger as the day progressed. Obviously, in these conditions, you will come off the throttles quite a bit.

When running directly into the mess I could maintain a good ride without getting battered around too badly. At one point a sneaky curler popped up and we all were expecting to take it over the bow, but with a small jab on the throttles the Yogi held firm and that was avoided. Running side-on I was certain we would get drenched, but again the ride was relatively dry, stable and comfortable, considering the conditions. Running with the swell it only took powering in and out of the troughs to again maintain the good ride.

What’s my opinion on the handling on the Yogi-Cat 500? Well, it’s not often that you can gain so much confidence in a craft in such a short space of time, particularly enough confidence to push her through the harshest of conditions. I was impressed!

LAYOUT
The layout on the Yogi-Cat 500 is simple and spacious, offering everything you might need to make a day’s offshore fishing comfortable. The transom area has a small step-up between the motors, then there’s the false transom which houses dual roll bars, the live bait well, and the battery compartments.

This model had Flotex carpeting on the deck which definitely adds to the comfort for your feet and protects fishing equipment. Built into the deck are two decent-sized flush mount fish hatches and a raised centre petrol hatch that also serves as seating.

The gunnels house rod racks and are at a standard height suitable for comfortable fishing. The forward console area is also spacious and has ample cupboard space for stowage. A full wraparound windscreen opens up to the bow through the walkthrough in the centre of the console.

The bow has a decent sized anchor hatch that is easily accessible, and this is complemented by an assortment of stainless-steel fittings.

FISHABILITY
What’s her fishability like? Well, that’s a simple one considering the good handling capabilities of the Yogi-Cat 500 and her spacious layout. With good stability and comfort at all speeds, the boat is easy to control, and on the drift, even in the rough conditions, I found it easy to move around on her.

FINISH
As previously mentioned, the Yogi-Cat 500 is based on standard cat lines, and KZN Boats have added a number of small personal touches, all of which add to the Yogi-Cat’s neat, spacious look.

CONCLUSION
Like many boats of this size, the Yogi-Cat 500 is easy to tow, even over long distances, and can be utilized on any waters. With her good handling capabilities, this craft is certainly worth a test, particularly for those die-hards who will fish even in pretty rough conditions.