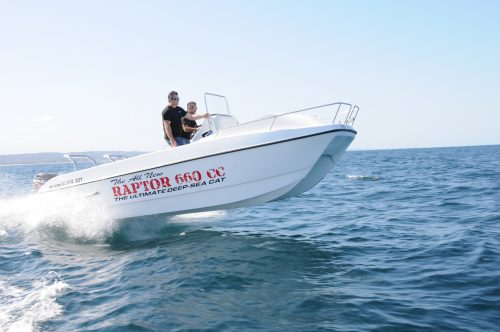 THE Raptor 660 Centre Console made its debut at the 2017 Johannesburg Boat Show during September 2017. There she was in all her glory, standing proud amongst the largest collective display of offshore ski-boats ever seen in South Africa. Nick Landzanakis of Natal Power Boats introduced her to me and explained in detail not only what was visually apparent, but also his thoughts on expanding his range of offshore craft for the South African market and the ballooning export demand for South African-manufactured craft in this category.

Three years ago Natal Power Boats acquired the mould for the proven Raptor 660 forward console craft (see the review in November/December 2013 issue of SKI-BOAT) and they have been having them built for their sole distribution ever since. Nick subsequently redeveloped the entire top-deck and centrally-sited the helm station console to meet the high expectations of sport anglers. This spinning-, jigging- and stand-up band of high energy offshore anglers have specific needs when it comes to plying their style of sportfishing and Nick has made sure that the Raptor 660 CC ticks all the boxes that their style of game fishing demands. When Heinrich Klein and I undertook the sea trial of the Raptor 660 FC in 2013 we were both immensely impressed not only with the craft’s on-water performance, but also her fishability. Since Natal Power Boats purchased the mould for the Raptor as well as the smaller Youji from Ricky Jacobs, they are having the craft built by a top KwaZulu-Natal professional boat builder using the most modern materials, techniques and floatation to produce a lighter, stronger and well finished craft.

I was very impressed with the Raptor 660 CC when I saw her at the boat show, but when I first saw her on the slipway of Duban’s Natal Rod and Reel Club on the afternoon of the review she seemed even more striking. Gone were all the bigger and smaller craft she was surrounded by at the Boat Show; here she was able to stand proud in her own space to show off her lines in profile to maximum advantage.

Spring weather in KwaZulu-Natal is terrible; wind, rain and overcast skies make it nigh impossible to get good photographs of any craft. Fortunately we found a gap between fronts for a few hours and at short notice Nick had the Raptor 660 CC on the water together with a photo boat. The north-easter had been shunting, but the wind had turned to the south and we were awaiting a buster south-westerly that was pushing up huge cloud banks on the southern horizon. The ocean was mushy with the remnants of the north-easterly swell and chop, overlaid with a frisky southerly chop. Certainly not the greatest sea conditions to provide an enjoyable day on the ocean. An advantage of the harbour launch is that Durban Harbour is virtually fully protected from the abovementioned prevailing winds, thus enabling us to run the speed trials that most people — apart from me — seem to put much store in. At 6 300 rpm the Raptor flew across the water at 70km/h. Yes, incredible. Yes, exciting. She rode extremely well at high speeds, but for me this scenario never gets replayed during the many hours I spend at sea fishing from ski-boats — I prefer travelling at more sedate speeds.

Natal Power Boats is South Africa’s premier Suzuki dealer, so it was not surprising that the Raptor 660 CC was fitted with twin 90hp Suzuki 4-stroke motors swinging standard 17 pitch props. As they say, it’s a marriage made in heaven. A pair of 90hp motors on this 21’6” craft seems to be the right combination. Whether you’re assessing them on the forward console version that experiences more wind resistance or on the centre console craft which is more streamlined, the two 90hp motors seem to be the correct weight and power ratio for this craft. Certainly during the time I spent at sea performing the trials on the Raptor 660 CC, carrying a crew of three, I never felt the need for extra power. The helm station positioning of the steering and controls was comfortable, and with the substantial bum box seating to lean against during tight and fast manoeuvres, I had full control of the rig. Even though the throttle/gear control levers were straight out of the box, they were smooth and not at all stiff throughout a full range of movement. The hydraulic steering system was a little bit tight, especially when executing very tight and fast manoeuvres. Nick told me he was trying out a new combination steering pump and hydraulic ram and agreed this aspect needed to be looked at again. Before we lost good sunlight I had Nick perform many repeated manoeuvres in front of my camera. “Many” is an understatement but while photographing I had an excellent opportunity to watch up close — sometimes too close — and take note of how this craft’s hull worked the turbulent sea conditions.

The Raptor 660 has a very flat trajectory ride, using her hull design and planing wetted area to address her stance rather than having to use motor trim to achieve the right combination of hull over water to maximise comfort. I toyed with this aspect a lot when I was behind the helm of the craft. Watching rpm at a set throttle position, I played with the trim settings on the motors while on the plane and when we were doing just over 20 knots SOG. Ranging from having both motors fully trimmed in to excessively trimmed up, time and again I replayed the exercise. I took on the existing sea conditions from a number of different angles, noting both the comfort experienced and the variation in rpm and SOG. Correlating these I returned time and time again to using minimal bow up trim — one notch on the trim gauge — to achieve what I believed was its perfect ride. During simulated surf work over Limestone Reef where there was a build up of a running swell, I trimmed both motors fully down which gave me the bite I needed to get her out of the hole and back onto the plane to take on a following wave. Only under extreme conditions with the motors trimmed too much did I experience a slight degree of cavitation. The torque of the 90hp Suzukis during out-the-hole exercises was impressive, as was the response when applying throttle at reasonable planing speeds. Speed-over-water on a ski-boat is not an exact science due to the vast number of imponderables the ocean throws at us boaters. The Raptor 660 CC very comfortably rode the sea on the plane at 20 knots at 4 000 rpm on both motors, with plenty of surplus power if needed. I also tested her performance on one motor with the other trimmed right up. In exact terms, at full throttle, I got onto the plane in about 12 seconds reaching 21 knots at 5 000 rpm (maximum throttle), then throttled back to 4 000 rpm and stayed on the plane at 15 knots. A marginally better performance was obtained when using only the port motor than when using the starboard motor; this is due to prop torque, but both would provide an easy home run on one motor if the need arose. I put big store in the protection from windblown spray one gets from a front console craft and was pleasantly surprised that no matter how hard I tried, from slow trolling on one motor to lure speed on two motors up to 9 knots, I could not get her to throw water onto the helm station area. I won’t say this will not happen in bigger seas and much stronger winds, but under reasonable conditions I was happy with this aspect of the Raptor 660 CC.

I am a forward console devotee but, as I said at the outset, a large number of current offshore anglers prefer the versatility of a centre console craft’s layout which allows them 360-degree fishability for most styles of offshore fishing. Although the “marlin manne” and other lure “draggers” generally prefer a forward helm station, there are many centre console craft that sport outriggers and are used for marlin fishing and lure pulling equally as effectively as forward console craft. With a length of 6.6 metres the Raptor 660 CC offers a vast amount of deck space to enable a full complement of four or five anglers to cast their plugs, work their jigs, drift side-on with bait or slow troll in comfort. Nick has ensured that a full array of above-deck stowage hatches, a livebait well and adequate seating is provided and is well positioned to enable easy access to all aboard. Each sponson hosts a good-sized below-deck fish hatch, and the fuel hatches situated aft of the fish hatches each hold three fuel containers. The battery boxes are housed in the false transom, as is the live baitwell which is centrally placed in the wide walkway through to the back of the craft. Carpeting (Flotex) is used as a deck covering and was perfectly laid on the craft under review. Nick is as fastidious as I am when it comes to the construction and finishing of the craft he sells, and the new Raptor 660 CC is a good example of a well-constructed craft made from perfect moulds and topped off with sturdy hardware. The stainless steel rails and aft supports are not only strongly made, but are also well-fitted for practical use.

The Raptor 660 CC is an extremely well made boat of a size that takes her into the big league of offshore sportfishing craft. Her size and weight allows her to be loaded onto a single axle trailer and be legally towed by most of the three-litre towing vehicles used by ski-boaters in South Africa these days. All of these attributes make the Raptor 660 CC an ideal craft for any sportfisherman who uses his craft extensively from any of the launch sites in South Africa. In addition, if one’s preferred playground is Moçambique the Raptor 660 CC has the fishability as well as the size, weight and towability to make such excursions the proverbial “walk in the park”.