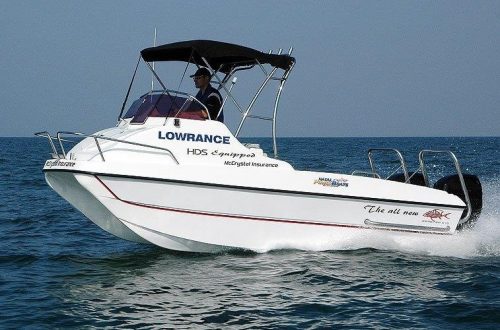 April 2010 issue of SKI-BOAT we ran a review on the Gamefish 510, but Ruli Stofilas from Natal Powerboats recently phoned to tell me that they had made some changes to the boat that I just had to see.
Essentially, they’ve given the Gamefish 510 a total facelift by redesigning the deck layout. The craft I tested this time also had different motors — the same horsepower, but Mercury instead of Suzuki.

GENERAL IMPRESSIONS
I’ve always thought this boat looked square and small, but I was blown away by how the top deck changes have made her look much more modern and appealing. LAYOUT
As most of the changes to this updated model are in the layout department, I’ll start there. The craft is still very spacious, and despite the Gamefish 510’s entry-level tag, she comes with some awesome features more likely to be found on bigger boats.
As I mentioned, the deck has been given a real facelift. To begin with, behind the driver and crew, in place of a single seat, they’ve fitted some leaner seats that I think are a great innovation.
In general, they have changed the boat’s square look by rounding the edges in a number of places. The gunnels have also been lifted, and these higher gunnels ensure a drier ride and more comfortable fishing. There’s also more deck space now, because the console has been moved slightly forward.
As before, the Gamefish 510 has two fish hatches — one on either side of the deck. Her batteries are still fitted at the stern, adjacent to the livebait well, but now there’s a glass window so that you can see your livebait inside the well.
As with the previous model, there’s a step at the bow which makes it easy to get to the anchor hatch. There’s still plenty of storage space on the Gamefish 510, including hatches in the front console where you can keep all the tackle. The new, leaner seats have tackle drawers in the front and small hatches behind the back seat.
I still think they should customise the standard seats she comes with, though, to add to her comfort and appeal.

CONDITIONS
The day of the test was a perfect summer’s day — perfect for fishing — but it meant we had to work very hard to get the boats to perform the way we wanted them to for decent photographs. Pity we couldn’t go fishing.

MOTORS AND CONTROLS
This test boat was fitted with twin 50hp EFI Mercury 4-stroke motors with side-mount controls. These controls are generally smooth if they are fitted correctly, and the engines slipped into and out of gear very easily.
The Gamefish 510 could be fitted with anything from two 40hp motors to two 90hp motors. I think the 50hp 4-strokes are more than adequate for this boat, because she is a light entry-level craft.
The only thing I would change here would be to either mount the controls slightly further back or fit a smaller steering. I felt that the controls were a little cramped, and somebody with big hands would have a problem steering. PERFORMANCE
As the hull has not been changed, and the motors were the same horsepower as the last boat I tested, there was very little difference in her performance. Once again I found the Gamefish 510 to be fully alive, although perhaps slightly more so this time than the last.
For those who didn’t read the review in the March issue of SKI-BOAT, I’ll recap my findings below. The rest of you can skip straight to the part where you phone Natal Powerboats to arrange a demo ride …
Out the hole she jumped on to the plane in a flash. As soon as that happened, I turned to starboard — a flat 360 degree turn with no hassles and no cavitation. I had the same response when I got onto the plane and did a 360 degree turn to port. Again, no sign of cavitation or leaning.
She runs true in the water, and I only had to make very small adjustments to run level. That is a good indication that the installation was done correctly and that her weight displacement is correct.
From standing still to full throttle in the surf, her acceleration was very fast through the waves, making the craft perfectly suitable for surf launches as well.
As an entry-level boat with a lot of grunt behind her, performance-wise I could not fault her. She’s very stable too, and even for her size she wouldn’t have to stand back for any other boat in her class, or even bigger. FISHABILITY
The Gamefish 510 is an entry-level boat for any facet of fishing, from bay, estuary, offshore and light tackle boat fishing, to dropping a line for carp and barbel in the dams. She is ideal for the fisherman who is not too competitive, but wants to relax, have fun and fish whenever he gets a chance.
The craft is very stable, which makes it safe to take mom and the kids out with you as well. And now the higher gunnels make it even safer to lean against the sides and fish, especially for the youngsters.

LAUNCHING AND TRAILERING
The Gamefish 510 comes standard on a breakneck galvanised trailer. Towing this model is much easier than her bigger counterparts, and she ran straight and true behind the tow vehicle.
We pushed her down the slipway at the Natal Rod and Reel Club in Durban Bay, and even at low tide she slipped off easily without us having to use the breakneck facility. After the test, reloading her was just as smooth and easy, and one person could handle this boat with ease.
In the past I’ve often offloaded and re-trailered the Gamefish 510 on the beach, which was also very simple and easy to do, without needing a huge tractor or 4×4 to accomplish it. She is lightweight, and as long as you’ve had a fair bit of experience, you shouldn’t have any hassles on the beach. CONCLUSION
The Gamefish 510 could be classified as an all-rounder for the entry-level market, and her price is not too steep. The changes Natal Powerboats have made to her are superb, and for a bit extra you can ask them to have the boat wrapped in whatever design your heart desires. This trend has been around in America for quite some time, and we’re seeing more and more of it here too.
With the recent tough times, many people are downgrading from their big boats and might find the Gamefish 510 to be just what they’re looking for. This is a snazzy little boat with a big heart that’s light to tow. All the improvements Natal Powerboats have made, indicate clearly that they are interested in listening to their customers and want to make the boat as comfortable as possible for them.
If you are looking for an entry-level boat, the Gamefish 510 is well worth more than a second look, so phone Natal Powerboats and arrange to take her for a demo ride.

There are no reviews yet.